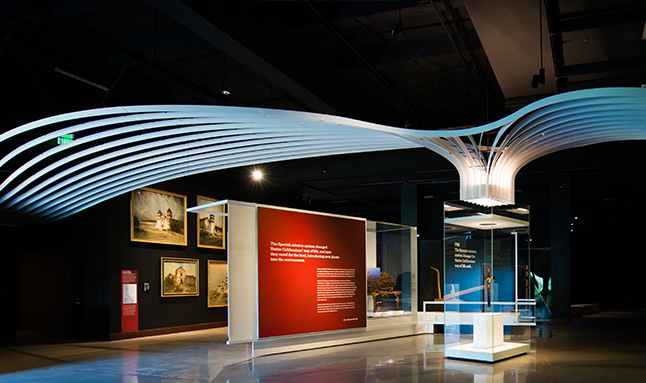 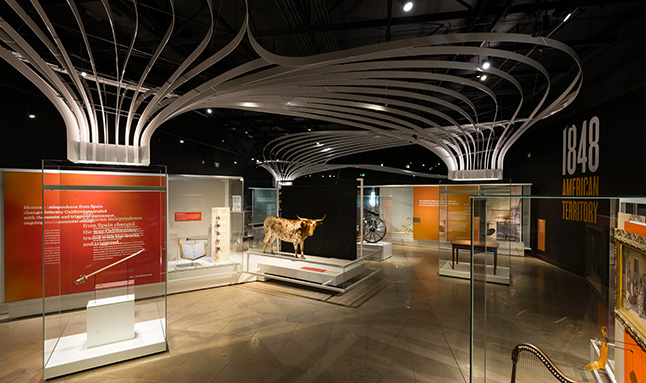 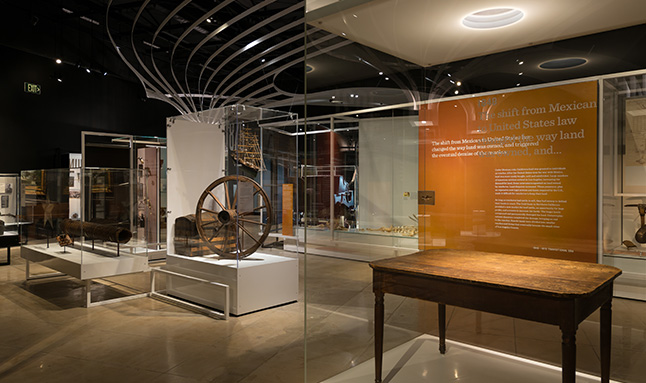 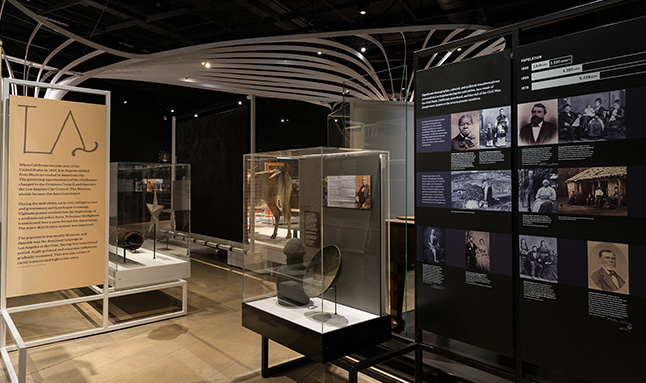 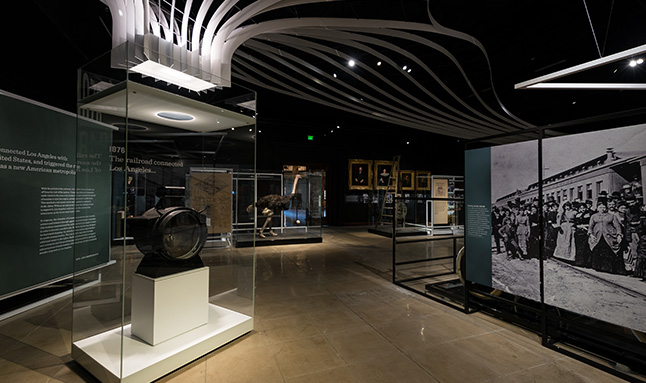 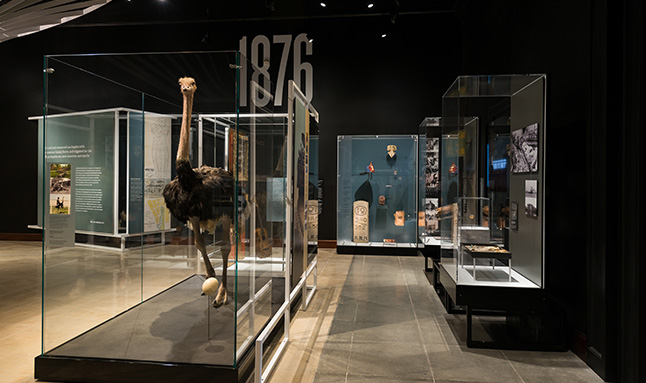 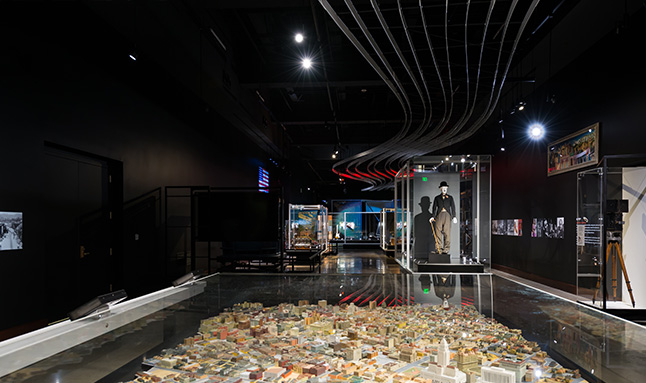 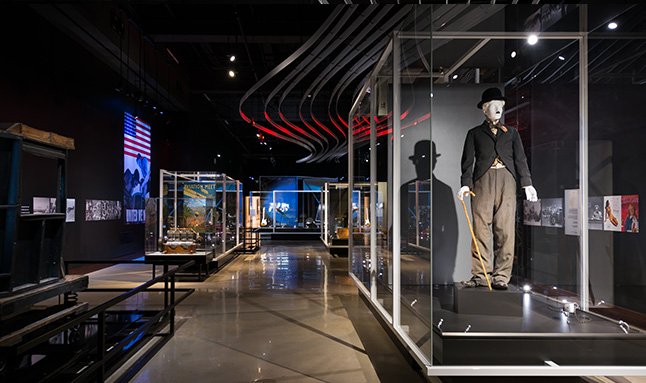 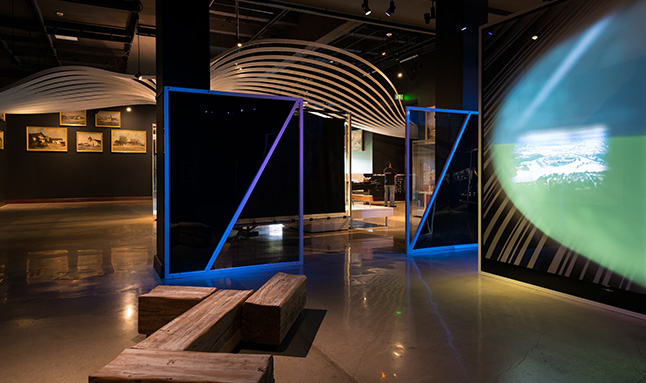 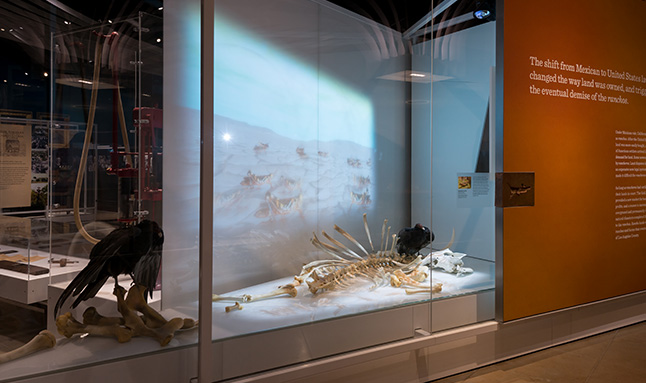 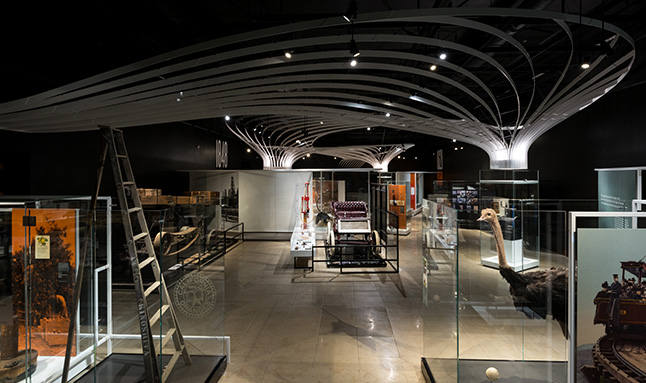 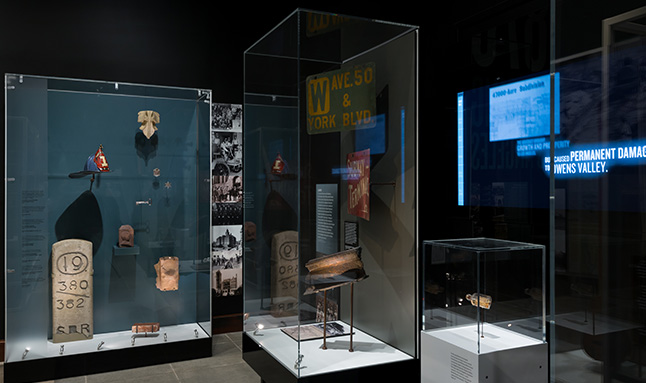 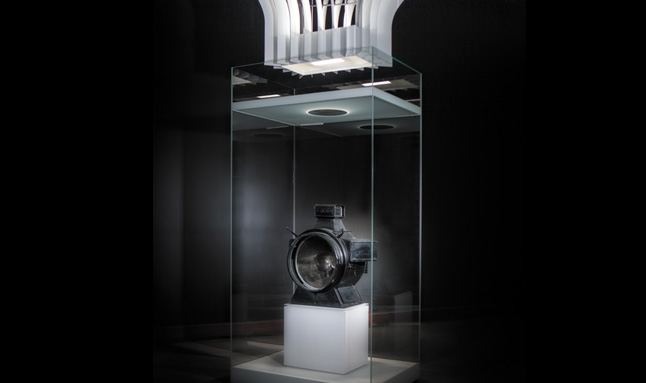 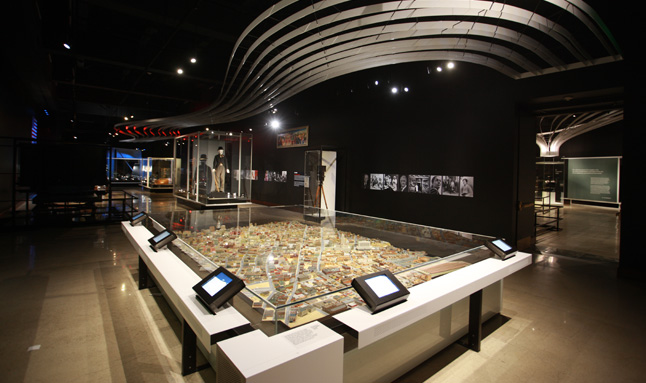 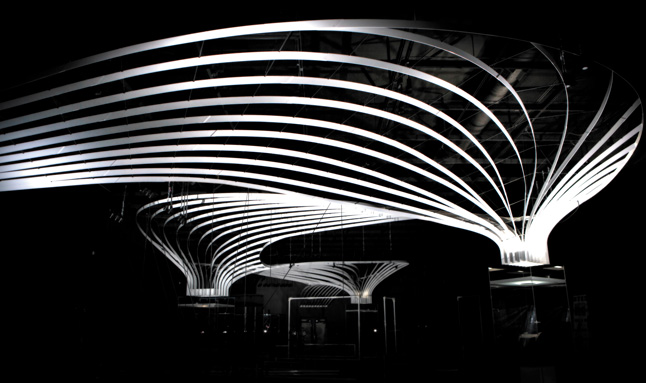 This stunning exhibition marks the second major project between the Natural History Museum and Cinnabar. In 2010, Cinnabar collaborated with the Museum during the design phase, produced and installed Age of Mammals, a 7,400-square-foot permanent exhibit that traces the evolution of mammals and mammal diversity over the last 65 million years. For Becoming Los Angeles, Cinnabar again worked closely with the NHM team to design-build, fabricate, and install all of the exhibit elements over a 25-month period.

Becoming Los Angeles explores the growth of Los Angeles over the course of five centuries, illustrating the interconnection of the city’s ecological and cultural histories. It brings LA history to life through compelling stories and ancient and historic artifacts — objects made and used by Native Americans, colonists, and settlers; rancheros, citrus growers and oil barons; captains of industry, boosters, and radicals; filmmakers, innovators, and more. It also features visitor-activated multi-media installations and moments, including an interactive scale model of downtown L.A. in the 1930s. This exhibition, installed in a suite of four adjacent galleries in NHM’s newly renovated 1913 and 1920s buildings, is the largest in the Museum.

The close level of collaboration between Cinnabar and NHM involved in the creation of the exhibition is rarely seen in the museum world. From a project management stand point, Becoming Los Angeles was exceptional. It incorporated a substantial amount of early and proactive prototyping, which allowed for considerable dexterity, flexibility, creative approaches & solutions to building, and out of the box thinking along the way. As part of that process, a four-member design team from NHM was embedded in Cinnabar’s production facilities for five months during design-build work, in order to maintain constant dialogue and streamline the design & fabrication process.

This process included the technical challenge of fabricating a sweeping overhead steel canopy that flows through all the halls of the show, tying the exhibits together and emphasizing important turn of events in Los Angeles’s history.

The canopy is a narrative component that weaves through the exhibit, acting as a chorus element and reinforcing the modern approach to displaying artifacts and content. Designed as a series of uninterrupted fluid gestures, the 3,000 square foot canopy is actually composed of close to 4,500 feet of narrow steel ribs, ceiling hung from 244 stainless steel cables and assembled in sections that were required to fit through a space no larger than a pair of standard interior doors. The structure and its rigging methods is an unprecedented accomplishment in Los Angeles County, the first of its kind to be permitted.

To achieve this task, Cinnabar joined forces with structural engineering firm Buro Happold to develop fabrication strategies that allowed pre-assembly of all the components of the canopy in our shop before paint finishing and transportation to the museum. Buro Happold made use of complex 3-D modeling software to refine the geometry of the canopy into a series of curved pieces that could be efficiently produced from the lightest possible steel sheet that would also meet seismic performance requirements.

Translating the canopy’s flowing design into digital fabrication files, required Cinnabar and Buro Happold to find solutions to integrating 1,264 mechanical splice connections, 241 welded structural support members and complex rigging assemblies. Having Cinnabar, a design-build firm, involved in the process from the early stages ensured an efficient production stream between NHM designers and the structural engineers. Our role was not only to manage the production of the canopy, but to participate in larger discussions about how it would integrate within the space of the exhibit. Cinnabar was a nexus for all the components of the puzzle to be assembled. The fabrication was carefully planned in overlapping production phases from weld assembly, finishing and installation. The process took Cinnabar only nine months from receipt of the first waterjet metal rib section to the last cable connection into the ceiling of the museum. 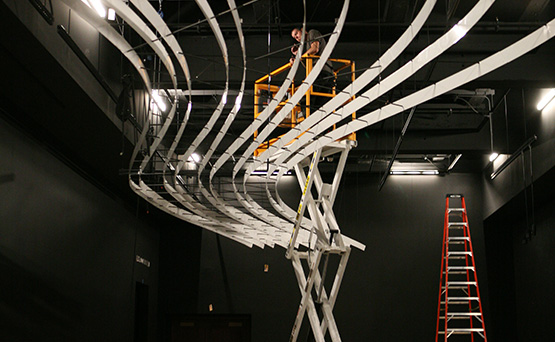 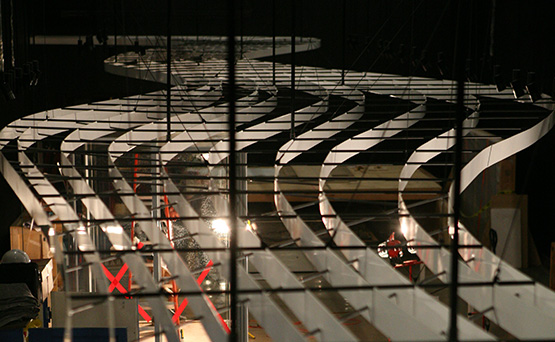 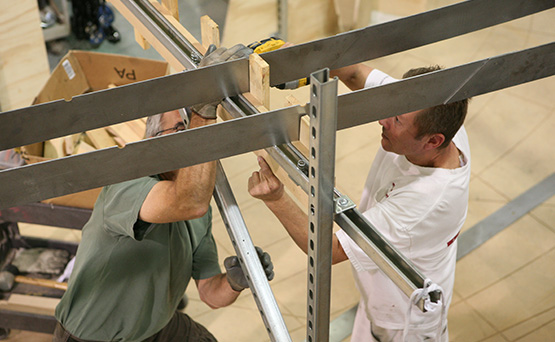 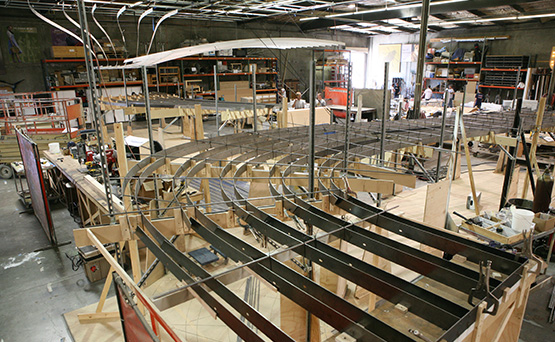 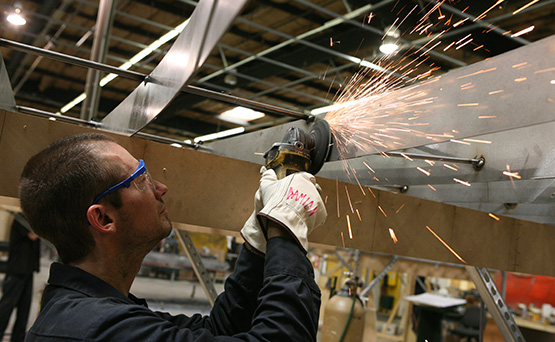 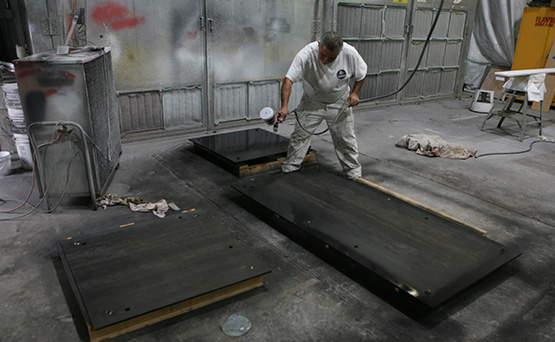 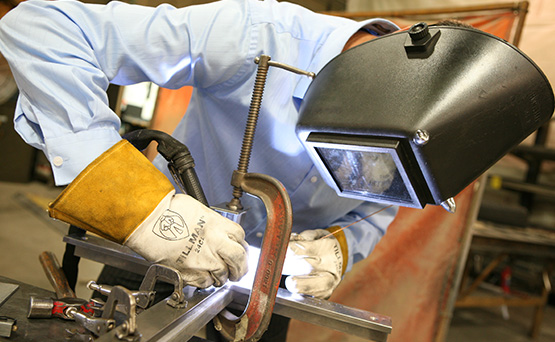 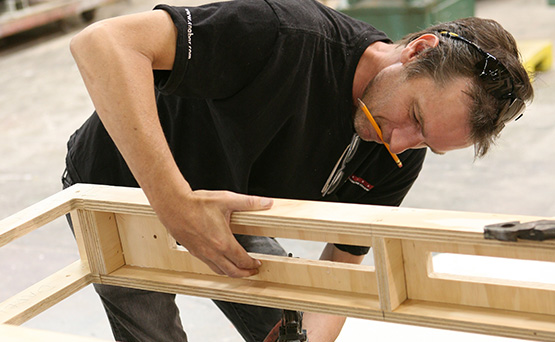 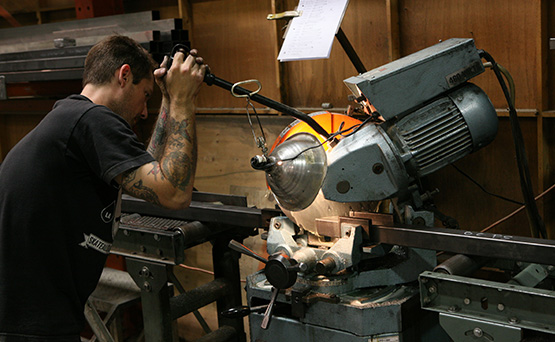 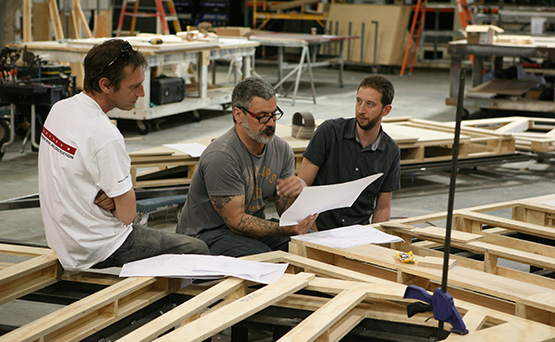 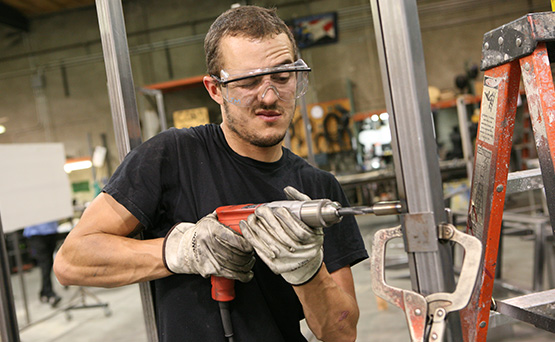 Becoming Los Angeles also required high quality, beautifully engineered glass and steel display cases. For this, Cinnabar worked with the renowned case company—and Cinnabar Alliance Partner—Glasbau Hahn, from Frankfurt, Germany. Becoming Los Angeles contains over 40 cases, with custom-built interiors, containing hundreds of rare objects and artifacts such as a taxidermy cow or Walt Disney’s animation stand. These objects called for large and structurally reinforced display cases and platforms. These cases are notable for their exceptional size and unusual shapes. They required large hinged doors made of glass, concealed hardware, as well as the challenge of achieving cantilevered displays of up to 1 meter (3.2 feet) that were primarily all glass construction. In order to house a large-scale model of Los Angeles in a conserved environment, Glasbau Hahn designed & built a 3×4 meter (10’ x 13’ foot) horizontal glass case with an integrated sliding platform mechanism allowing access to the entire model for care and maintenance.

As the lighting design team for the award winning Age of Mammals exhibit next door, First Circle was up for the challenge to create a unique and trend-setting exhibit that would exemplify story telling. With the use of 100% LED technology First Circle designed a flexible system that supported the Spanish Mission Era’s candle warmth feeling, to the early 20th century’s enriched colors, bringing forth a layer of visual communication connecting the visitor to each moment. Cinnabar and First Circle have previously collaborated on many projects, including the California Academy of Sciences in San Francisco.

Cinnabar contracted and managed a team of sub-contractors composed of some of the best experts and specialists in the industry, many of whom Cinnabar has collaborated with closely in the past. Audio-visual systems company BBI Engineering out of San Francisco and Ely, Inc., mount makers, provided the exhibit with outstanding levels of service and collaboration. Becoming Los Angeles also features interactive storytelling components from award-winning Second Story studios out of Portland, Oregon, and overall graphic design by Los Angeles firm Adams Morioka.